The story of Adam & Eve in Genesis is often described as an allegory of creation by those believers who recognise that it contradicts the evidence presented by the scientic consensus surrounding biological evolution and the origins of the universe. 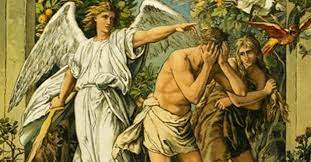 However I think this is duplicitous. To me is clearly intended to explain the presence of sin in humanity rather than the origin of our species (or perhaps at a stretch both). Certainly any modern reader with even a passing understanding of the order and timescales of the creation of the universe couldn't treat it asa literal description of creation.

If, however, it is an allegory, and therefore just a metaphor, the deflection in the story becomes even more transparent. If sin is disobedience to God, as personified by Eve (of course it had to be a woman in those even more patriarchic days, leading her husband astray), then without a specific event, the fall never happened. Anyway, what is actually wrong with eating fruit from the tree of knowledge (or life, depending on which version of the tale your read in Genesis)?  Surely both life and knowledge are good things, and I cannot possibly envisage any human being who doesn't want (and need) a measure of both these things.

What has to be surely accepted is that the 'fall' is a core part of Christian theology throughout the ages and certainly central to substitutional atonement.

I would suggest that 'disobedience to God' would be better described as 'disobedience to the God I have described to you, and whose laws I have explained to you', as it is very clear there is no evidence for any kind of involved God who could explain his laws in person. It must seem quite extraordinary to the devout how the great voice rumbling from heaven, or the creator wandering through the garden, only seemed to speak or appear in person in the old writings, but never now so that we can all hear or record it.

If God didn't create the tendency for free thinking, quest for knowledge, desire for life, self centeredness that drives biological evolution, individuality, the dislike of conformity and following instructions, the inquisitive excitement that comes from living on the edge that often causes humans to make poor decisions when judged by objective terms, then where did all these things come from? Good and evil is suggested to be a 'merism', a device that pairs opposite terms in order to create a general meaning (Egyptians use an expression evil-good, which is normally used to mean 'everything'. No human does know everything, so the apple didn't help with that condition much.

Christians have of course used the story with many interpretations of the 'knowledge of good and evil' - usually to underpin a particular obsession with a particular activity they feel is particularly sinful.

The central message of the fruit [apple came later perhaps as a Latin pun, "by eating the malum (apple), Eve contracted malum (evil)] on the tree in the Garden of Eden must surely be do as I say, even if you don't understand why I'm saying it, or cannot see what harm there could possibly be in eating the fruit. Just do it because I'm God and I'm in charge and I know better. I won't explain the consequences in advance just don't eat it. i.e. a set up.

So my suggestion is that as a description of real events or as an allegory of the nature of humanity and God the story of Adam & Eve, the talking snake and that lovely delicious looking fruit temping Eve to pluck and eat with her husband it is about as useful as a chocolate teapot.

At least the witch in the fairy tale Snow White is openly portrayed as evil, plotting Snow White's death, and the apple was deliberately poisoned and made available to the victim by deceit and trickery. Is the God of Genesis really so much different?

The Wikipedia article outlines the various Abrahamic interpretations of the myth as well suggesting that the 'fall of man' story predates the biblical texts, with an image on a cylinder seal, dating from c. 23rd-22nd century BCE depicting two facing figures seated on each side of a tree, holding their hands out to the fruit, while between their backs is a serpent.

Read more…
Many arguments about what it means to be human and the nature of consciousness become much easier once we recognise that you are not a brain - you are a body, one very important part of which is a brain.
Read more…